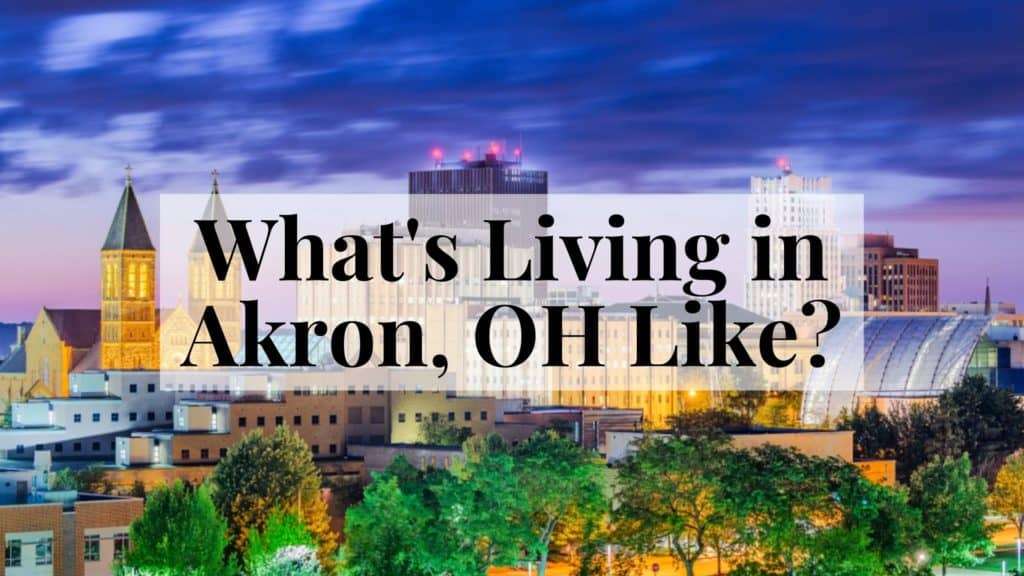 What’s Living in Akron Like? | 🤷 Is Moving to Akron, OH a Good Idea?

The metropolitan city of Akron, OH is a beautiful city located about 39 miles directly south of downtown Cleveland. Akron is bordered by various suburbs and nearby cities such as Portage Lakes, Tallmadge, Barberton, Fairlawn, Copley, and Cuyahoga Falls.

The area was settled in December 1825 by Irish laborers, led by Simon Perkins and Paul Williams. While the city saw slow growth at first, it became the fastest-growing city in the United States during the 1910s with a boost of 201.8% population growth from people moving to Akron. Over the years, Akron has become a central hub for many manufacturing and production companies across multiple industries.

Akron is known as the “City of Invention” because of the role it has played in a huge variety of creations including clay marbles, baby dolls, balloons, rubber ducks, balls, and many others. There are many other nicknames Akron has been called including the Rubber Capital of the World, Rubber City, Summit City, and Tire City.

A handful of famous and notable people have lived in Akron including abolitionist John Brown as well as actors Clark Gable and John Lithgow. NBA stars Lebron James and Stephen Curry were both born and raised in Akron, along with NFL linebacker James Harrison.

Akron is the county seat of Summit County and the fifth-largest city in Ohio behind Columbus, Toledo, Cleveland, and Cincinnati. Lovingly referring to themselves as “Akronites”, the population in Akron is 197,597 residents with a median age of 38 years old.

Akron demographics show the population consists of 58% Caucasian, 30% Black or African American, 5% Asian, and 3% Hispanic or Latino. The gender split in Akron is close with a slight advantage for women showing 51% and men the remaining 49%. The median household income in Akron is $41,013.

The city is relatively educated with almost 90% having a high school degree or higher and 22% have graduated from college.

The top Akron attraction is the local Akron Zoo, which spans more than 50 acres of land with over 700 species of wildlife. Among the most popular activities in the city, the zoo has a grizzly bear exhibit, lions, wolves, eagles, owls, snakes, frogs, invertebrates, and more. It is one of the best things to do in Akron with kids and offers fun all year round.

Another one of the most fun landmarks in Akron is Lock 3 Park, which is a common place for local residents to catch a concert. Depending on the time of year and during various holidays, the park offers some of the best things to do in Akron including ice skating, farmer’s markets, fireworks, Christmas lights, and more.

Luigi’s Restaurant is easily placed among the top spots to eat in Akron thanks to its delicious Italian food. The comfortable setting gives visitors a relaxed vibe as they choose from a menu that features award-winning pizza, ravioli, pasta, meatball sandwiches, lasagna, and many others.

Another location offering great food is the Akron Family Restaurant with its old-fashioned feel. Serving up breakfast, lunch, and dinner, every meal is delicious and tastes homemade. Joining the top restaurants in Akron, their menu features salads, sandwiches, pitas, steak, pork chops, grilled chicken, fish, spaghetti, and a variety of other dishes.

4. Cost of Living in Akron, OH

Recognized as one of the most affordable cities in the United States, the cost of living in Akron is 13% lower than the Ohio average and 31% lower than the national average.  Essentially all expenses in Akron cost less than the state average including groceries, healthcare, utilities, transportation, and housing.

With a homeownership rate of 50.6% in Akron, only about half its residents own property. The average price of a home in Akron is $110,000, which equals a median sales price of $97 per square foot. It’s considered a competitive market as Akron, OH homes for sale stay on the market for an average of 28 days before going pending.

Is Akron, OH a safe place to live? The crime rate in Akron is 70% higher than the national average with a 1 in 24 chance of becoming a victim of crime. As with any major city, there will always be areas that are safer than others, giving you options as you decide where to live. 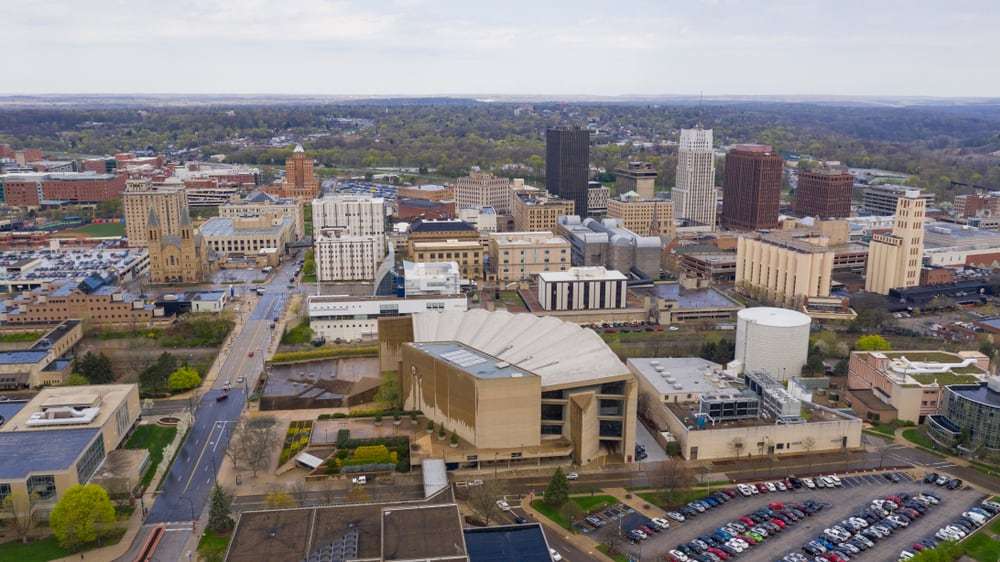 Some of the top neighborhoods in Akron include:

Residents in the area are pleased to have many convenient shopping options in Akron including Chapel Hill Mall, Walgreens, Summit Mall, Walmart, Save A Lot, and Westgate Shopping Center.

The top-rated schools in Akron are:

Newly graduated high school students or anyone looking to get a college degree can attend the University of Akron located at the center of Akron. There is also the nearby option of Kent State University less than 15 miles away in Kent, OH.

The city of Akron has long been a hub for manufacturing, retail, healthcare, construction, and other industries. Working individuals make an average salary in Akron of $60,000.

A few of the biggest companies offering Akron jobs are:

For anyone who travels for work, the average commute time in Akron is 21 minutes.

Residents living in Akron experience the pros and cons of having four distinct seasons with its humid continental climate. Following the trend of other cities in the Midwest, Akron weather has warm, muggy winters and freezing, windy winters. 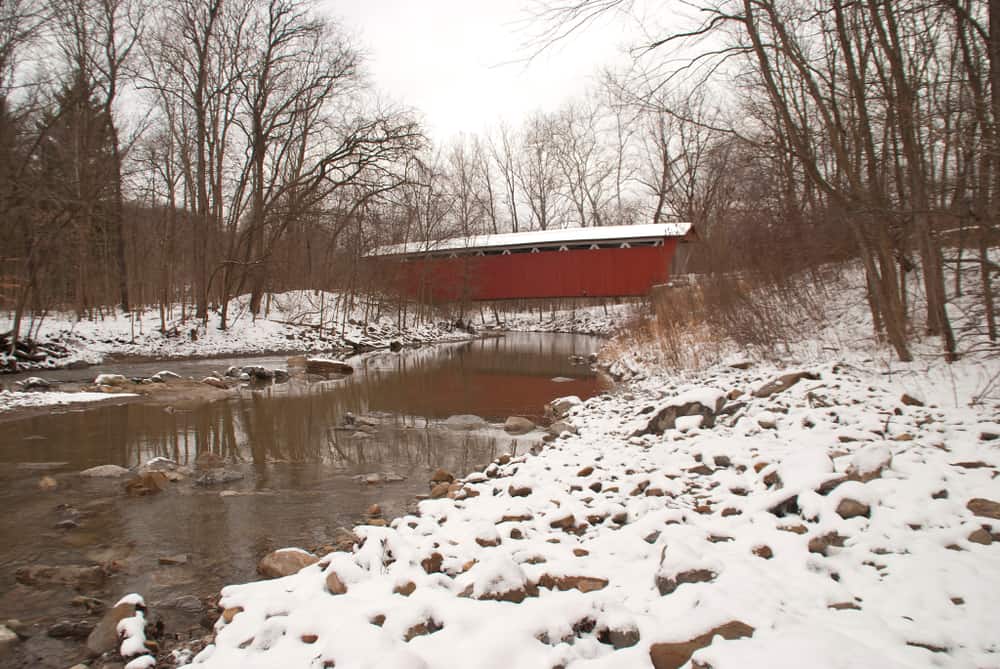 During the warmer months in Akron, temperatures reach highs in the mid-80s during the day and lows in the mid-60s at night. As the season changes to winter in Akron, the coldest months will bring temperatures between the low 20s and mid-30s. Akron gets an average of 38 inches of rain and 42 inches of snowfall every year.

This area continues to be a popular place to live in Ohio, making it clear why people keep moving to Akron. If you’re getting ready to relocate to this city, trust the team of helpful Akron movers here at Summit Moving & Storage! Give us a call today at (330) 633-3633 or complete the Request a Quote form on this page for a free moving estimate! 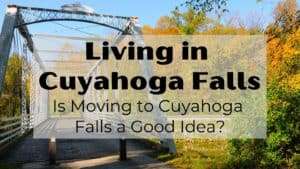 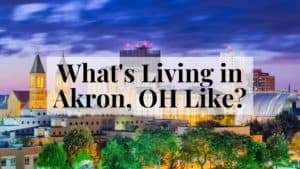 What’s Living in Akron Like? | 🤷 Is Moving to Akron, OH a Good Idea? 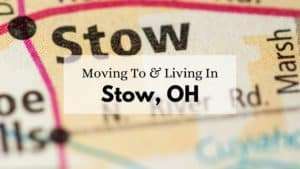